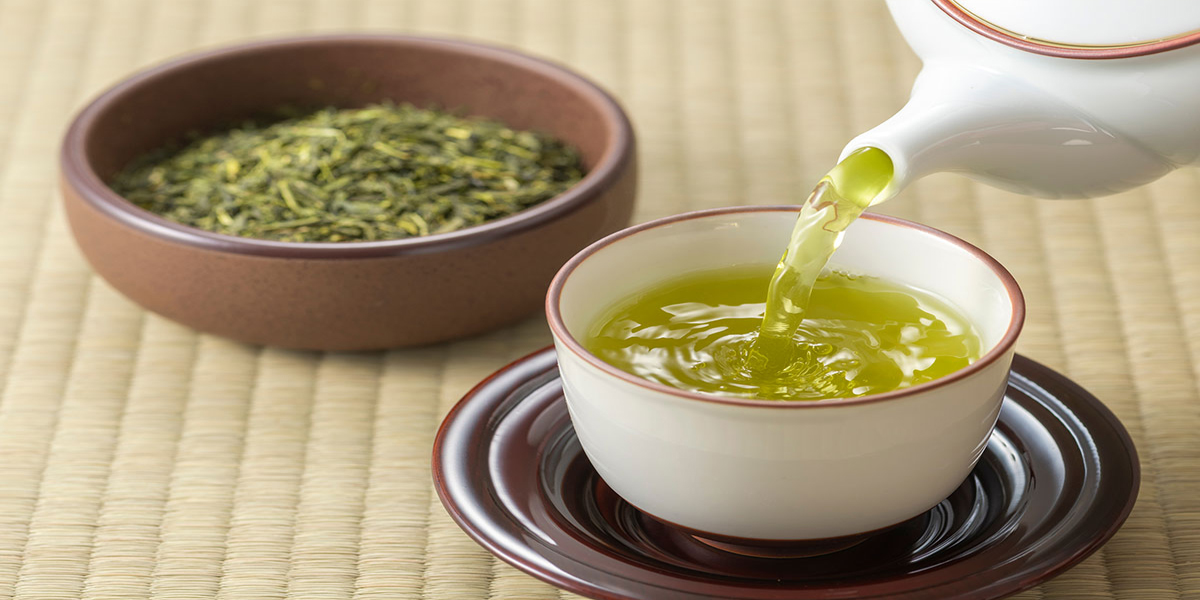 Popular in china and other asian countries for thousands of years, green tea has been shown to have significant medicinal as well as therapeutic properties. Like the black tea more familiar in the western countries, green tea comes from the camellia sinensis plant. The difference between black and green teas lies in their processing. Black tea is fermented, whereas green tea, which is prepared from steamed, dried leaves, is not allowed to ferment. Also, some types of green tea are lightly roasted. The minimal processing helps retain the tea’s green color, gives it a flowery aroma and fresh flavour and also preserves the active ingredients that produce the tea’s health benefits. Green tea may help prevent tooth decay, high blood pressure, heart disease and several forms of cancer. It also invigorates the body and improves concentration.

Preparation of the tea:-

Place 1 rounded tsp. of tea leaves per cup in a teapot. Heat the water until it is slimmering (160 deg F); cool briefly (vigorously boiling water can destroy the tea’s gentle flavour). Pour the water over the tea leaves; cover the pot. For a mild flavour, let the pot stand 2-3 min; for a stronger flavour, steep for 4-6 min. Warning: contains high caffeine content.

All tea leaves contain caffeine, tannins, essential oils, polyphenols, vitamins, minerals and trace elements (such as fluoride). Green tea has many health benefits. It is an anti-inflammatory; lowers blood cholesterol levels, has a beneficial effect on the circulation and liver; protects against tooth decay and detoxifies the blood.

While green tea is highly touted for its health benefits, it does contain a high level of caffeine. Depending on how long it brews, a 6 oz. cup of green tea has 10-50 mg. of caffeine. While this stimulant improves concentration and boosts alertness, it also increases the heart rate and could keep you from getting a good night’s rest.

The fluoride found in green tea hardens tooth enamel and makes teeth more resistant to decay. Do not give tea to infants, however, because it may inhibit iron metabolism.

Too much caffeine can increase your heart rate, restlessness and insomnia. To lower the caffeine content of green tea, pour a little water over the leaves prior to infusion and strain the water off after 30 seconds. Then prepare the tea as usual.

Vitamin and mineral needs increase during menopause. Daily consumption of green tea can supply woman with the extra nutrients.

If you are trying to refrain from that daily java, consider switching to green tea. It has a smoky and bitter flavour that coffee drinkers enjoy and the caffeine content, which is less than coffee, will keep away the caffeine withdrawl headaches.

For fasting and detoxification

Known in China as a fat-melter, because of its cholesterol lowering effects, green tea contains no calories and is recommended nutritional supplement.

According to scientific studies, compounds called polyphenols in green tea may inhibit the growth of cancer cells and the development of tumours. The benefit of these compounds is generally attributed to their antioxidant activity. Several cups of green tea per day are needed to enjoy this benefit.

Japan
Sencha
This is the most widely consumed tea in Japan and is also probably the most common Japanese tea available today.
Bancha
A low caffeine variety, this tea is similar in appearance to sencha, but has a less bitter flavour.

India
Green Assam
This tea comes from the Assam plateau, the largest tea growing district in the world. Only a small amount of the tea from this area is used to produce green tea.
Green Darjeeling
Grown on the southern slopes of the Himalayas, green Darjeeling tea is especially gentle on the body because of the minimal processing.

China
Gunpowder
The leaves are tightly rolled into pellets that resemble buckshot. They unfurl once steeped in water.
Jasmine Tea
A slightly fermented, flowery tea produced from genuine jasmine flowers. Some varieties are combinations of green and black teas.